Posted on March 14, 2012 by destashification

My mother asked that I create a “Memory Jacket” for her 80th birthday. Crazy quilting, charms, embroidery are combined with bits and pieces to create a jacket identifying occurrences in her life. 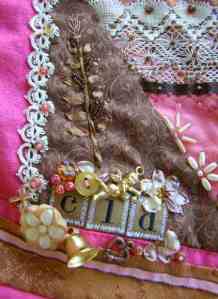 The farm in Iowa where she grew up is represented by the embroidered corn stalk.

When dinner was ready, she called us home for dinner using a cow bell.  The small bell in the lower left corner cannot duplicate the decibel level of that copper cow bell, but it does remind us of that clanging!

We never threw away worn clothing without removing zippers and buttons because “you never know when you might need them!”  The jacket is adorned with several “saved” buttons, including the vintage flower button in the lower left corner and the shirt button over the “C”.

There are 3 teapots, as she enjoys a cup of tea.

There were five of us children, so there is a repeating theme of five appearing on the jacket.  Five buttons, five hearts, etc.

A charm of wise owls, representing education, can also be seen in the Theme of Five photo.  After my youngest sister started kindergarten, my mom went back to school and earned Bachelor’s and Master’s Degrees. 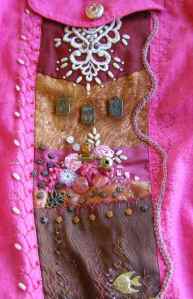 Later on, the five of us gained three step-siblings and she currently has a total of 17 grandchildren.  Took a while to sew that many beads on!

As a woman of faith, the Trinity, represented by three bible charms, are of importance to her.

While difficult to see in the picture, there is also another pot of tea and a sewing machine charm!  When we were growing up, my mother sewed all of out clothes – and she still sews for herself now!

Our family vacations usually took us to the ocean.

My mother has a love of music.  In high school she played the trumpet and even today leads her community choir.

She created a number of cross stitch samplers that are hung throughout her house.  This miniature sampler includes a pig and a chicken, animals we heard Iowa farm stories about. 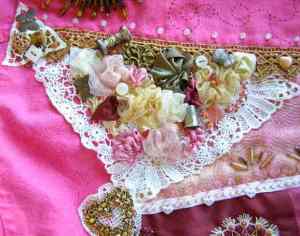 The upper left jacket back is heavily embellished with silk ribbon flowers.  It also contains several charms including a thimble, spool of thread, and a skein of yarn.

The jacket back yoke is decorated with a beaded sun/moon and wind-blown swirls.  Perhaps it was the farm upbringing, but weather was always important to her.  It has been awhile since I waited for the school bus in mid-winter, but the wind on a  40 below morning tends to produce a lifelong memory! 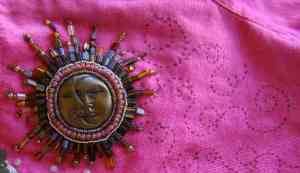 The jacket is a raspberry pink linen/cotton jean jacket.  The embellishments are brown, ivory, rust and light pink.  Most of the beads and laces are from The Stash.  The charms were purchased specifically for this project.

5 Responses to The Memory Jacket