MMQ Blocks 5, 6 and 7: Pinwheel and Variations

Posted on June 6, 2012 by destashification

Pinwheel is another traditional quilting pattern.

When multiple blocks are joined – especially if completed in brightly colored and patterned fabric – the quilt top appears to be in motion! (see more at TLC Home Website)

The Paper Piecing Diagram shows that the lower left triangles are sewn first, then the upper right larger triangle finishes the block.

Baste and trim excess fabric and add borders following instructions for MMQ Block 1 and Borders – and another block is complete!

The Pinwheel Variations used for the next two blocks are similar, just a minor difference in the location and width of a narrow strip.

Neither variation alters the first two pieces of the block – they remain a Half Square Triangle.  However, the larger upper triangle has a stripe which is sewn first, then flipped, and pressed.  Then the upper triangle piece is sewn on. 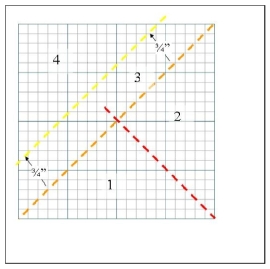 Piece 3 is a 3/4″ wide stripe.  Once sewn along the orange line, flipped and pressed, the final triangle Piece 4 is added.

Pinwheel Variation 2 also has an added strip – but this strip is quite narrow (approximately 1/2″) and is centered over the centerline of the square.

Being such a narrow strip, precision is very important! Even the smallest deviation from precise sewing will be obvious!

Good thing there is Paper Piecing for Precision!

The benefits of drawing the Paper Piecing diagrams on graph paper will also become apparent when drawing the sewing lines for the center stripe.  Place the lines two squares up (for the upper line) and two squares down (for the lower line) from the centerline.  This will result in a strip with a consistent width of approximately 1/2″.  Counting two squares is so much easier than trying to determine the correct measurement (it involves calculating a square root)! 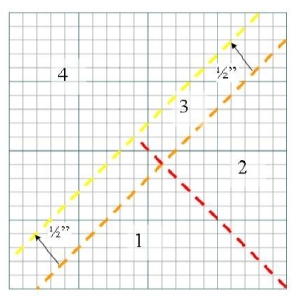 Love the ease of graph paper!

Because of the different placement of lights and darks, these two very similar blocks look quite different.

Even with as few as 4 seams, the blocks are beginning to look quite complex!

Make one extra block from one of the patterns and 8 of 16 blocks are complete!

Block 1: Square in a Square

Another Block 1: Square in a Square