Fabric Roses: How to Make

The fabric flower embellishments include a coral rose, shown on the left side of this photo.

They are simply a strip of fabric slightly gathered and rolled up.

1.  Start with a strip of fabric approximately 3″ wide by 12″ long, fold in half length wise and iron flat.

Cut one short end of the fabric so that it tapers toward the fold – I guess one could say it looks like a sword.

In the photos for this project, fold lines are shown as yellow lines.  The direction of the fold is shown with a blue arrow.

2.  Hand stitch (or machine stitch) a gathering stitch along the non-folded edge – through both layers of fabric.

Again, the gathering stitch does not have to be perfectly even or consistent.

3.  Pull the thread slightly.  This will pull the “tip of the sword” downward slightly.

Second Fold: Tip over the Blad

5.  Second Fold:  The second fold is similar to the first fold – same direction, just slightly larger.  These could be considered folding the tip of the sword over the blade of the sword.

6.  Third Fold:  Pinch the fabric along the yellow fold line and bring it towards the tip.

The photo labeled “After Fold 3” shows how the rose should look when the Third Fold is complete.

Tack fold down with a stitch or two.

After Fold Four and Folding Lines for Fold Five

Pinch along the yellow line and bring it towards the tip as shown in the photo labeled “After Fold Four”.

Tack with a few stitches.

These folds form the petals of the rose.

8.  Fold Five:  Fold along the yellow line, which will bring the “blade” around to the back of the rose.

Tack down with a few stitches.

9.  Pull gathering thread slightly tighter and roll it around rose, taking tacking stitches as needed, until about 2″ of sword blade remains.

10.  Final Fold:  To “hide” the raw edge, fold it down along the yellow line and tack stitch to the rose.

11. …and the Rose is complete! Tack stitch onto a base fabric and enjoy! 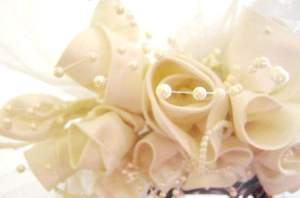 I have been making Fabric Roses for a number of years.  Below is picture of the roses on my wedding veil – from 1992!

4 Responses to Fabric Roses: How to Make