Posted on May 8, 2012 by destashification

The Prom Dress was beyond beautiful.  A skirt of cascading rows of coral chiffon, and a bodice with heavy rhinestone and “jeweled” embellishments!

Of course, such an occasion calls for a Prom Purse.

Of course, such an occasion also occurs when there is little or no time to create a Prom Purse.

There are times a project must be declared “finished” not because the stitching and embellishment have reached a pleasing point – but simply because there is no more time!

So, the clock started ticking and fabric was pulled from The Stash:

I also gathered every silver or rhinestone-bearing embellishment in The Stash.

The monogram “F” was self-sticking, which would have been a nice time saver, but as it required infilling with extra beads, it was stitched as well. (FYI: removing Sticky Stuff from beading needles requires too much time!).

The Stash contains odd items – a rhinestone lizard among them!

The daughter plays volleyball, so the volleyball charm was added!

The ribbon roses were made following instructions here – but used ribbon rather than fabric as it was quicker. I wanted to add more, but time was running out.

I sewed as quickly as I could…

My “artsy” side wanted the cascading design of the skirt to be reflected in the purse. 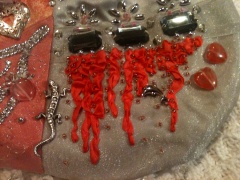 The silk ribbon used for the cascades is a dark coral color – although it appears quite red in the photo.

Swimming among the cascades is a dolphin charm.  As I stitched it on, I was wishing I could sew as fast as dolphins can swim!

I often wondered what to do with those little bags of beads and sequins that come attached to garments!  They added a bit more sparkle to the bag.

Then time ran out…

The purse was finished.

It performed its function well.  It held all the important items – cell phone, prom ticket, etc.  It matched the beautiful dress and shoes.

But if only there had been another few hours/days/weeks …..

Like Loading...
This entry was posted in Crazy Quilting, Embellishment, Purses, Sewing, Sewing for a Teenager, Stash Couture and tagged embellishment, Prom Purse. Bookmark the permalink.

3 Responses to Prom Purse Finished – because time ran out!