Posted on June 6, 2013 by destashification

The Ohio Star Quilt Pattern is beautiful and can be sewn Math and Frustration-Free!

After finishing the Double Half-Square Triangles (DHST) from Part 1, it is time to sew up the blocks!

Each Ohio Star block will require the four DHSTs from Part 1, one 5″ square of the print for the center square and four 5″ squares for the corners. 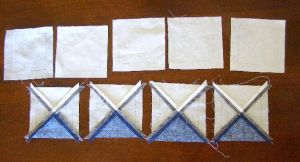 The squares being 5″ is just to simplify things.  Since the squares used to make the DHST were 5″, consistency just makes things simpler.  They are trimmed to approximately 4″ later.

Carefully cut a 3″ square from see-through plastic.  I used template plastic from The Stash and cut it using a rotary blade that was too dull for fabric. (Does anyone else save dull blades?)

This template will be traced on the back of the fabric pieces.

The tracing lines will be the sewing lines.

Draw diagonal dotted lines on the template from corner to opposite corner.  This will help make the DHST “square.”

Trace around the template being careful to mark corners well. 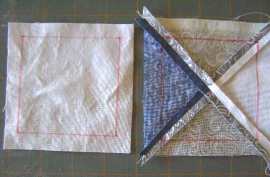 Trace the template onto the corner and center “plain” squares as well (‘plain’ meaning ‘not pieced’).  Trim the plain squares to 1/2″ or so beyond the traced lines.

Lay out squares in pattern.

Lay the squares out in the Ohio Star pattern.

Notice that all DHST pieces will be sewn to a plain square.  (see Oops Photo below)

Using the Poke and Pin method used in the DHST, align the corners of two adjacent pieces. 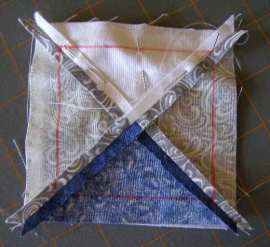 Poked and Pinned, ready to sew.

Sew along the traced line.

I typically sew on the DHST side rather than the plain square side.

Flip piece over and verify that seam is on (or approximately on) the traced line.  Remove pins, trim seam allowance slightly and press seam open.

Three strips ready to be sewn into complete block.

Repeat until three “strips” of three squares are complete.  Sewing the strips together following the same Poke and Pin process – poke and pin the corners and sew along the lines.

And then take a moment to congratulate yourself on your first completed block!

As I needed 25 blocks, a trip to The Stash was required for blue and grey fabrics.

This piecing method is Math-Free.  But, one would think that if each of the squares were traced from a 3″ square the finished block would be 9″, right?

So, measure a few of your blocks from star point to star point (that is the finished size).  Mine were 9 and 1/4″ (except for one that was 8 and 7/8″ – and discarded).  Then cut a paper or cardboard square to that measured size.  I used quilting graph paper from The Stash – again cut with that dull rotary blade.

On Point separated by plain blocks

At this point one must decide how the blocks will be laid out in the final quilt top.

There are many options.

A quick Google search produces a myriad of options.

9.25″ square traced on back of plain fabric

Then Poke and Pin the Ohio Star Blocks to the plain blocks.  Sew along the lines. Verify the seam is correct.  Trim seam allowance slightly and press seams open.

Repeat until quilt top is complete.  Add borders if desired.

Place on a bed for all to see and congratulate yourself on a beautiful job!

Then pack it up and ship to the Long Arm Quilter so she can work her magic!