Posted on September 5, 2013 by destashification 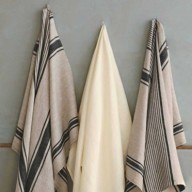 A number of home catalogs are featuring luxury linen towels.  Although linen is a wonderfully absorbent fabric, costs of near $100 per towel are prohibitive.

Being that I have a SLS (Sizeable Linen Stash), I decided to sew a few of these luxury towels.

The SLS provided a few options, but in keeping with the muted tones of those towels available commercially, a 1.75 yard =/- remnant of raw 100% upholstery weight linen was selected and then washed in hot water – twice.

After pulling threads to create straight edges, the towel dimensions were 60″ by 30″. The long raw edges were narrow hemmed.  The selvedge edges were left visible as they were woven with some color interest.

Wanting a bit more visual interest, a machine decorative stitch was added across the width.  If I had not run out of black thread, I would have added a few more rows of decorative stitching. (I can always add more later – after rebuilding The Thread Stash)

The resulting towels are wonderfully absorbent, quick drying and, best of all – my husband’s favorite towels!

Luxury Towels for Little – Little Time (about an hour) and Little Cost (less than $10 each!)