Posted on October 14, 2013 by destashification 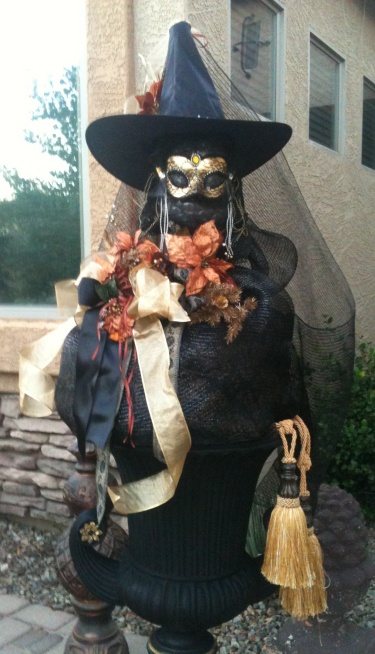 How does one know that they have too much stuff?

A.  The crew from “Hoarders, Buried Alive” is knocking on the front door.

B.  You see a 5 foot tall,  $350 “Witch in a Cauldron” at a National Craft Chain Store and realize you have almost everything required to make it.

To create the witch,  three  purchases totaling less than $10 were required:  A witch hat, a mask and a roll of black nylon netting.

The rest – I am embarrassed to admit – I had.

The cauldron was one of a matched set of planters.  The other one broke.

Those partially used cans of black spray paint stored in the garage were put to use painting the cauldron black.

The witch is supported by a rake.  The rake end is held into the bottom of the cauldron by 20+ yards of fabric that during the winter is used as tree wrap.

Screening, leftover from those papermaking projects, forms the body.  Plastic grocery bags, waiting in the closet (for about a year now) to be returned to the grocery store for recycling were used as stuffing.  Fabric remaining from sewing a shower curtain was layered over the screening and then wrapped with the nylon netting. 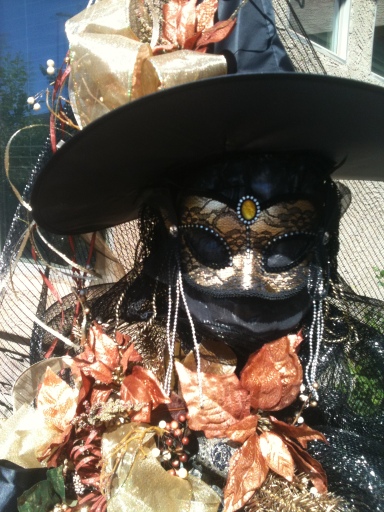 I am not sure who decided sand volleyball courts should be ringed with cactus, but the number of deflated volleyballs in my garage can attest to cactus not being a viable landscaping idea for such an area!

Holes were cut into one such volleyball and it was slipped over the rake handle.

Grey bubble wrap was duct taped to the ball. Then with much effort, a pantyhose leg was pulled down over the “head”.

Lace, flowers, ribbons and other embellishments were added – and secured by glue gun.

I want to add blinking lights for the eyes – and I know we have some – but they seem to be hiding!

1 Response to Witch in a Cauldron – Halloween Destashification Style