A yard of teal linen blend was crying out to be included in the Summer Top Series.

It was selected to create a “wearable muslin” – which is a trial attempt at new pattern.  Fitting and improving design are integral parts of the trial.

Vogue 8472 is a jacket, but the wider neckline and A-lined body  made me think it would be a lovely hot season sleeveless linen top.

One of the main reasons this design required a muslin was the length.   However, adding an inch to the front and  2 inches to the back still created a “cropped” length.

The final garment – which is to have a much more ethereal look – will require adding at least 2 more inches – and the use of a much lighter fabric!

Smocking, rather than gathering was used on the back panel.  It maintains the non-clingy A-line shape of the top and adds that “Stash Couture” element.

Not being a teal person, the Fabric Stash was somewhat bereft in that color for lining choices.  But a marbled purple blue green teal quilting cotton presented itself.  Somewhat darker than planned on, it will extend wearing of the top well into the fall!

Attaching the yoke in a sleeveless version was a bit tricky.   The yoke and its lining were sewn together – almost all the way around – but only machine basted at the bottom edge.  It was then trimmed, clipped and turned right side out and ironed.

And ironed again.  The lower edge basting was then removed. 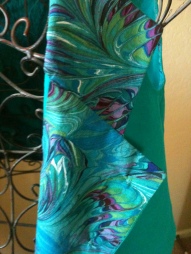 This created a perfectly rounded seamline guide on both the lower linen and the lower lining edges.  The armholes of the lower body had been finished using bias binding cut from the marbeled fabric.

After understitching the neck edge of the yoke, the lower body pieces were attached to the linen yoke at the created “seamline guide.”  The shoulder edges were then sewn together – by machine – (this requires heavy pinning and some maneuvering, but was doable.)  Lastly, the yoke linings were hand stitched down. No topstitching was used.

Bound Buttonholes on a trial garment?  Seemed like a good place to practice them. Problem was, the garment was all but done when the decision was made to use bound buttonholes….

Note to self:  Bound buttonholes should be constructed early in the garment sewing process – certainly NOT after the linings have been attached and understitched!