Posted on August 30, 2014 by destashification

A family member collected over 200 ties while working as a FBI agent.  After he  retired, the ties were forwarded my way to create a quilt. Most of the ties were 1980s and 1990s vintage.

If you were not around to witness firsthand the neckties of the 80s and 90s – let them be summarized as not having “universal appeal.”

Most of these ties were silk and in very good condition.

A simple version of foundation piecing was used to piece the tessellated star pattern – the sewing lines are drawn directly onto the foundation fabric using a stencil. 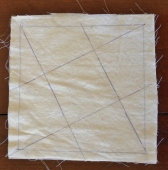 The result were grey fabric foundation blocks with the sewing lines drawn on the back.  (The example is in off-white as the lines do not show well against grey in a photo.) 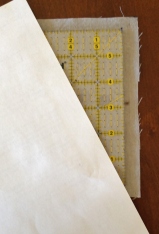 Connect side center point to opposite corner to create pattern.

This simple geometric pattern is created by drawing lines from the center point of one edge to the opposite corner for each of the 4 sides.

After sewing and trimming, each unit is 4 triangle-shaped wedges around an offset square of the foundation fabric. 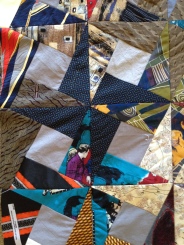 As each star connects to 4 adjacent stars, laying out the triangles must be done with care (and the occasional unstitching.) 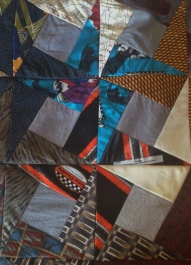 Elvis (turquoise) and Harley Davidson ties in the quilt top

What a collection of ties!  A Harley-Davidson tie, a tie from prep school, three Elvis ties, a Beatles Yellow Submarine tie, several Jerry Garcia ties – even a tie with sperm swimming across it! 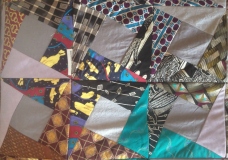 Beatles Yellow Submarine and Ticket to Ride (black and white)

Many were gifts and must have had been associated with rather interesting stories!

The rather disparate colors and patterns played against one another beautifully in the tessellated pattern.

The colors seem to recede and then reappear as the eye travels from one start to the nest, simulating a twinkle!

The few plain fabrics in the quilt top were cut from men’s shirts.

The star field is surrounded by borders of grey and small ties squares – which allowed small bow ties that were also included in the collection to be included in the quilt.

The top took some time to piece, but it was always intriguing to see how each tie worked with the colors and textures of the adjacent ties.  Now that the piecing is done – it is off to the wonderful  long armed quilter so she can work her magic! 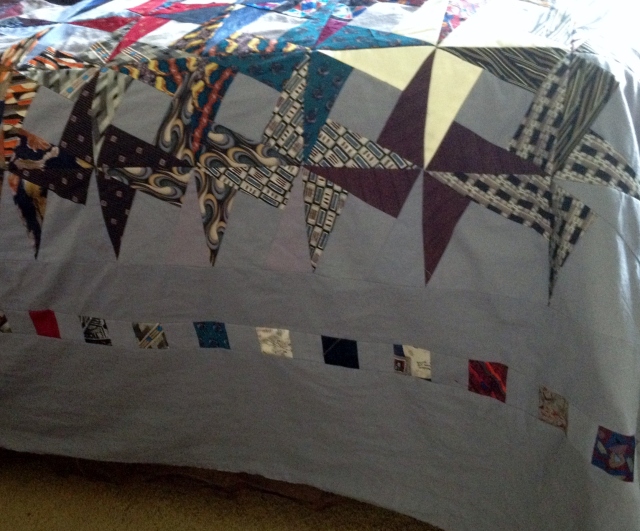