Posted on November 7, 2014 by destashification

Being able to spend the time finishing UFOs (UnFinished Objects) is about the only positive associated with being sick.

The UFOs (and there are many) included this Grey, Black and Handpainted Yarn Linen Stitch Scarf.  Knitting Instructions are found here. 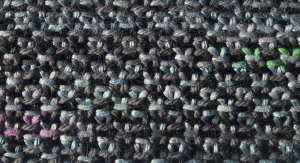 A year or so ago, the scarf was started as a project to use up leftover yarns.  Apparently, at the time I started knitting this scarf, I desired to use up the dark yarns first.  Earlier attempts to use the yarn included knitting  this angora scarf.

Every third row was knit with black yarn.

The Banyon is left over from a sweater.  It is a variegated yarn that grades from very light grey to black, but also includes short lengths of bright colors (green, pink, blue and purple.)

This created a very dark scarf.

The darker colors no longer appealed to me…. and for a very (VERY) fleeting moment the possibility of raveling out the scarf to start again was entertained….

Thankfully, it was a fleeting thought.

By reducing the number of rows knit in the darker yarns the scarf was graded lighter and lighter.

The black and dark grey were eventually replaced completely with lighter greys and bluish greys and small amounts of sage green.  The sage was leftover from this sweater.

The scarf ended up being almost 8 feet long.

Now to sew a coat to wear it with….